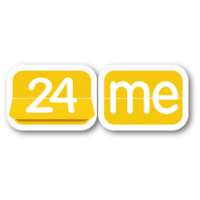 24me –From Ideation to CAC Control

1
Began as a personal project between co-founders and spouses, Liat Mordechay and Gilad Hertanu, as a way to use their time more efficiently with their 4 children
2
Launched in 2013 with an iOS application. The company released an Android version in 2014
3
Raised a Seed round between 2013 and 2014, before which they were bootstrapping
4

Life Is a Juggling Act

For most of us, life is busy. The day-to-day activities usually take up a large chunk of time, and there are plenty of events that often require advance planning. An average day for a typical person can include fulfilling personal errands, doing family-related activities, or taking care of kids and a household. The average person's professional life is also packed with tasks and activities ranging from meetings and projects, to deadlines and so on. There are many resources available to help manage the daily juggle, however, in a way, the resources themselves can also require management. People are inundated with information and notifications from various sources, which in and of itself can be a challenge. They usually look to a variety of products that manage all types of responsibilities – stretching from calendars, to notes, to-do lists, and other applications – and these usually only provide users with reminders for upcoming events. There is not one simple place where people can manage their dynamic schedules, while completing their tasks and errands in immediate ways. The delicate balance between taking care of ourselves and enjoying life is just that, delicate. This is where 24me comes into play.

Liat Mordechay Hertanu and her husband were no outliers. With four kids and both working full-time jobs, their delicate life harmony morphed into a highly fragile balancing act. It didn’t make sense to them that there were no tools to help busy people do the repetitive and mundane, almost robotic tasks, in order to clear more time to do the enjoyable human ones. “We tried different solutions, but nothing really worked for us,” said Liat. “From different types of reminders, to task managers, to calendars, none had all of the solutions we needed.” It was in 2013 that Liat and her husband, Gilad (both Computer Science graduates from IDC Herzliya), decided to build the solution they needed, which they named 24me.

From Ideation to Product

When ideating on their MVP, Liat and Gilad imagined a one-stop shop to help fulfill all of their routine responsibilities between work and spending time with their children. Liat began to list them out: pickup dry cleaning, pay household bills, buy birthday presents, drop off mail, go grocery shopping, and on and on it went. Actually, by the time she finished the list, one could hear a subtle sense of exhaustion in her tone.

Fast forwarding, all of these tasks would ultimately become features in the 24me application. The robust personal assistant tool that 24me is today is a grand evolution of one complete product for all calendars, tasks, notes, and personal reminders, which consists of unique features and market testing. It includes everything from bill payment reminders, to a gift marketplace for sending presents for special events, to the ability to book hotels for business and leisure, as well as other task automations, such as sending emails and text messages that the system recognizes and helps complete automatically.

Early on in their ideation phase, Liat and Gilad quickly agreed that adding all of the features they imagined would be their long-term game plan. However, in the beginning, they focused solely on a lean minimum viable product (MVP), an app that created personalized tasks automatically and provided users with a way to accomplish them via one-tap completion buttons. The MVP included bill payments, a TaskRabbit integration for tasks that the system “recognized” by errand type, and a birthday marketplace for sending gifts automatically or posting greetings on social media that were scheduled directly from 24me. While this sounds oddly simple, it's imperative to remember that in 2013, the App Store was a much smaller marketplace with far less offerings than what exists today. When it came down to determining which features to roll out first, Liat based her decisions on a mixture of market research and her own definition of the main pain points that people hate dealing with. They tried to narrow down what really keeps most working parents from an otherwise more fluid day-to-day. “We took it as our mission and we tried to come up with a time management solution by looking at ourselves, as busy people with families,'' said Liat. “We searched, we looked at other people around our age, and we looked at the most urgent things that people were always complaining about.”

Liat spoke to over 50 friends and acquaintances, seeking the most common needs. One major finding showed a heavy desire to remember friends' birthdays; these are small yet significant details that many people mentioned got lost in their busy days. While starting as a calendar reminder, this feature eventually grew more robust, and today enables users to send a gift, such as flowers, directly from the app. Most of the app features began as simple calendar reminders, and Mordechay gave them layers over time. Another major feature well-loved by its current users is the ability to integrate their online bank accounts 24me and pay anything from phone bills to electricity bills through the app. This began as a simple reminder to pay bills by their deadline, and now more closely resembles the “one-stop shop” Mordechay dreamed up in 2012. Evolving features over time allowed for Liat to understand what really worked and what was worth the investment of time and resources.

A revolutionary moment for 24me came about when they did a back end integration o fTaskRabbit,81 an online marketplace where users can post a task they need to perform and individuals can bid on an amount to complete it. The bidder who wins can fulfill the task in exchange for compensation. By becoming their partner and essentially replicating the TaskRabbit engine, 24me started its own marketplace. From getting individuals to drop off dry cleaning, to offering vendors for sending gifts and other essentials, 24me grew into an efficient 360-degree task manager.

As 24me advanced, so did the company’s revenue opportunities. Most of their user traffic started and continues to grow organically. When Liat and team launched the 24me app back in 2013, the Apple App Store chose to feature it. They saw that the app was well-built and had a clean and simple design, and Apple decided to promote it. This actually went against Liat’s launch strategy, which was to start under the radar and continue to fix some of their code and app functionality. Nevertheless, it drove user traffic and a great response from both users and Apple developers alike. “We got a phone call from Apple from one of their senior staff members at the App Store, and he told Gilad that they really love what 24me is doing, they love the design and product offering, and to please keep in touch,” said Mordechay. “It was surprising because we always thought we would need a lot of money to acquire users.” A week after they launched, 24me was selected by the App Store as one of the 10 essential productivity apps, next to Evernote, who at the time had raised $70 million dollars.82 “With next to zero dollars in our bank account, this was a big deal that again generated a lot of organic traffic for us,” said Liat.

From Liat’s conversations with developers and other entrepreneurs, she had learned that in order to generate hype at an app launch, they would need funding to put money into marketing. 24me was completely bootstrapped, as Liat and her husband had used money from their own pockets to cover the development, so they were pleasantly surprised to see organic traffic. They quickly understood that the product and its offering were the main aspects that needed to work, and that the funding was secondary. If the product wasn’t good enough, no amount of money would sustain success. The marketing money spent on user acquisition would help gather downloads, but after a week, these users would fall off if they were not hooked on the product offering. So they kept on building and evolving features that would captivate their users and organically spread the user growth. Still, access to the app and all of its components were free, so Liat needed to come up with a way to make real revenue.

In the beginning, they didn’t know what the real solution for a business model would be. They did a lot of trial and error with different strategies to see what could work. Their first attempt to drive revenue was by trying to share revenue with partnering technologies, like TaskRabbit, or the several vendors they featured for gifts. While the potential was there, ultimately, it was not a viable solution for 24me.

Then, in 2016, Apple gave app developers the opportunity to create subscriptions in apps. At the time, 24me was a free app with a huge tier of features available to all users. To meet this revenue opportunity, Liat and her team created a package of advanced features and solutions for their pro-users, specifically those who were looking for sophisticated productivity features. They priced the advanced premium version of 24me at a few dollars a month, and kept a free tier rich with features for the vast majority of their audience. The money and users flooded in. “It turned out to be a very good solution for us and for our business model,” said Liat. “That was another milestone that allowed us to have more flexibility. Once you're generating money, there are more things you can do and develop.”

Through all of the years of development, Liat and her team never used a PR company, never planned on revenues from a specific revenue model, and never spent big bucks on marketing efforts or on acquiring users. Instead, they focused on building a quality product to meet a specific need for a large target audience. It seemed that users were attracted to both the product and the authenticity behind the founders’ story. In the end, Liat and her husband built a product that helped them spend their own time more efficiently, so they can spend those extra hours with their kids and loved ones. However, it seemed to speak far beyond their own lives, as so many working parents share the same desires and time struggles. Now the app has millions of users and is still growing. 24me still has a long road ahead as the team continues to develop the product and grow their revenue, but Liat does so with a clear understanding of the app’s target audience, as well as financial support from its subscription model.